Candis made the cover! Part 2 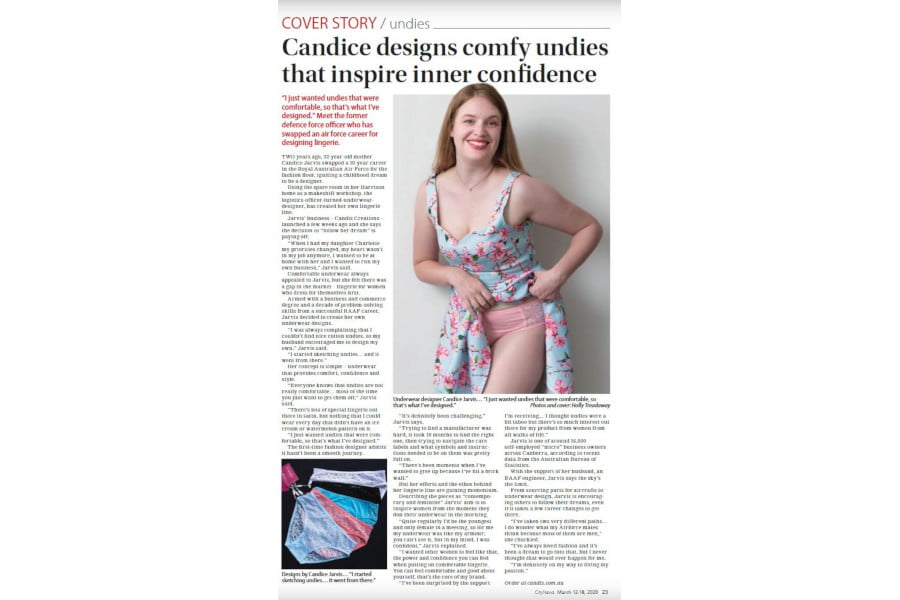 The first step was the Canberra City News article interview. I was very nervous. I’ve never been interviewed for a magazine before. To give me confidence from the inside, I donned my Annabella in light blue Candis lace undies! I put on the Ted Baker dress I bought 2 years ago but that still had the tag attached! It’s my “dress for the job you want dress”! The final touch to my armour was my hot pink Jimmy Choo stilettos which were, believe it or not, a 29th birthday gift from my husband – he has good taste! To finish my look, I put on some make-up, dusted off my hair straightener and I was ready!

I was immediately at ease with the journalist, Belinda. We bonded over our love of books and that we both had our daughters with us. The interview was like a conversation with a girlfriend except that it was being recorded! It was strange talking about myself without asking questions back but that’s the nature of interviews I suppose. I’m proud of the article produced and the picture it paints of Candis Creations.

The photo shoot was the next step and I was asked to find a model. After calling all my friends and model contacts, it became clear that I’d have to be brave and model myself. I’m not a model so I was very apprehensive. I chose a dress that made me feel pretty and that had a full skirt that allowed me to ‘flash’ my lace lingerie. I knew I’d chosen right when my daughter said, “Wow! You look so pretty!” I chose to wear Amity Candis pink panties because the design is sexy but modest. This was important to me if the whole of Canberra was going to see my pretty underwear! Again, I finished my armour with those hot pink Jimmy Choo’s.

The photo shoot was lots of fun! I felt empowered and everyday sexy! My photographer, Holly, was very creative and she made the session enjoyable. She even stood on the couch to get the perfect shot! The cover shot was one of the last photos we took and is my favourite. I struggled to hold the pose and fell over just after Holly snapped the photo!

The radio interview was an unexpected surprise. I was even more nervous than before because it was going to be a live phone call. I put on my Alexis Candis black undies for confidence. My biggest fear was what if I got tongue tied? I paced the floor waiting for the phone call. I took some deep breaths and tried to forget there were listeners. Instead, I focused on the conversation and tried to think before I spoke! I couldn’t hear the interview, but I didn’t get tongue tied so that’s a success in my book!

I’m very proud of myself for finding the confidence to put myself out there for this Canberra City News feature and I’m over the shock that the whole of Canberra has seen my sexy undies. Now, I own it!